During a webinar organized by ChilePork, the researcher covered various topics related to African swine fever, prospects and forecasts for the Americas and beyond. Today marked the beginning of the webinar series organized by the sector brand ChilePork, with simultaneous translation into Japanese, Korean, and Spanish to keep contact with trading partners in Japan and […] 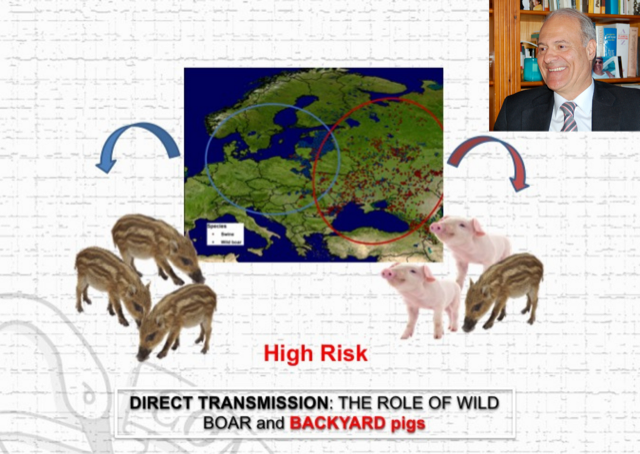 During a webinar organized by ChilePork, the researcher covered various topics related to African swine fever, prospects and forecasts for the Americas and beyond.

Today marked the beginning of the webinar series organized by the sector brand ChilePork, with simultaneous translation into Japanese, Korean, and Spanish to keep contact with trading partners in Japan and South Korea, while offering tools to facilitate the marketing and promotion of Chilean pork in Asian markets. The event began with a presentation from Juan Carlos Domínguez, President of ChileCarne, the Chilean Meat Exporters’ Association, who highlighted that since its beginnings , the Chilean pork industry has focused on exporting to the most demanding global markets, which is why the industry was “Born to Export,” and follows high standards of health, safety, and biosecurity.

“We can ensure that thanks to our one-of-a-kind production model, each one of ChilePork’s member companies has control over their entire production chain. From genetics, to feed-producing plants, animal production areas, slaughterhouses and their related processes, as well as logistics and marketing of each product. In short, our industry can guarantee a complete traceability system. We believe that the focus on exports, our complete traceability, and our health programs developed in collaboration with SAG (the Chilean Agricultural and Livestock Service) helped us to be well prepared when the Covid-19 pandemic hit hard,” said Juan Carlos Domínguez.

Before Professor Sánchez-Vizcaíno’s presentation, Domínguez introduced four representatives of ChilePork’s associates: Alejandro Muñoz, Commercial Manager of AASA; Andrés Arancibia, Export Manager of Agrosuper; Guillermo García, General Manager of Coexca; and Jorge Rozas, Commercial Manager of Maxagro. They all greeted the importers attending from the other side of the world, highlighting that this meeting was different but, “we will be together again soon.”

Then, it was José Manuel Sánchez-Vizcaíno’s turn. He is a veterinarian, researcher, and professor at the Universidad Complutense de Madrid (UCM). He heads up the Viral Immunology and Preventive Medicine Unit (SUAT) of the VISAVET Health Surveillance Lab run by the university and the World Organization for Animal Health (OIE), as well as a 10 million EUR project funded by the European Union to develop a vaccine to control African swine fever (ASF).

His presentation covered the following topics: 2020, the year of pandemics; global situation of the African swine fever and its health and economic impact; the future of ASF; the impact of Covid-19; the importance of biosecurity; and Chile: a country well-prepared for the future.

In his signature friendly and clear tone, the international expert began his conference by providing an outlook of the ASF situation worldwide. He reported that more than 8 million hogs have died around the world, 82% of those in Asia. This is partly due to the high risk factors found in Asian countries, such as infection through blood and feed, the entry of carrier animals to slaughterhouses, the use of infected vehicles, and in general terms, limited biosecurity with little or no financial compensation. That is why he made a direct plea to avoid the entry of infected hogs into slaughterhouses.

Sánchez-Vizcaíno also showed which countries are most affected by the disease and which ones are ASF-free. To date, four continents are being affected, and over 50 countries face seven different epidemiological scenarios. “Over 78% of the world’s hog population is at risk,” he stated.

He went on to explain that the virus is very resistant, of great molecular complexity, mobility and genetic variability. “Hence, both wild and domesticated animals all over the world might be more protected from some strains but not from others. This is why it is a complex and immunologically aggressive virus,” he highlighted.

The professor insisted on the importance of biosecurity as the best tool the global pork industry has to fight this disease, while highlighting the high level of the Chilean pork industry, which constitutes a strength to prevent the entry of diseases and ensure food safety, as well as a competitive advantage as a market that offers quality products with the highest standards of health and safety.

In contrast, Sánchez-Vizcaíno made a clear distinction between the low and high biosecurity measures implemented on different pig farms around the world. He stressed the need to keep working on the oversight of prevention programs. The expert went on to say, “I have visited many places around the world, both farms and plants, and I can say that countries like Chile have fantastic control measures in place, on farms and the industry in general. My congratulations to the Chilean companies, and I encourage you to keep it up.”

Sánchez-Vizcaíno also mentioned that since 2016 there has been a clear increase in pork production worldwide. Imports have also grown, with China holding the highest import rates and being the main destination for global pork exports. He pointed out that, “I think China’s objective is to keep covering its demand through imports. They do not want to add any more risks to the ones they already have. They will keep buying from ASF-free countries.” The European Union, the United States, Canada, Brazil and Chile, in that order, are the leading countries in global exports of this protein, hence the importance of keeping them ASF-free. Sánchez-Vizcaíno analyzed how long the disease could persist, considering different scenarios. He offered a diagnosis and a forecast, stating that ASF will continue to spread through Europe and Asia, and that it might make the leap to the Americas. Regarding a vaccine, he compared an ineffective one to a good-quality one, noting that three potential vaccines are currently being developed. Another interesting issue he covered, which he described as the main hurdle, is the inability of countries and industries to “change cultural traditions; that is the greatest challenge,” he said.

In late 2019, the European Union approved a project called VACDIVA (a vaccine that differentiates between infected and vaccinated animals) led by Sánchez-Vizcaíno with an investment of 10 million euros. The project, made up of a consortium of 20 countries, aims at developing a completely safe vaccine, DIVA (which distinguishes infected and vaccinated animals) and building a vaccination program for various epidemiological scenarios. They were given four years to develop a vaccine and they already have three promising prototypes.

In this regard, the expert explained the objectives of VACDIVA. “Today, we know so much more globally, because we are taking the genes from the virus to develop a vaccine. I am optimistic, and I estimate that we will have a vaccine in two or three years,” he said. During the Q&A session, Sánchez-Vizcaíno explained that VACDIVA provides immunity 10 to 15 days after vaccination, and that they are currently working on extending the immunity period.

Regarding the effectiveness of the vaccines being developed around the world, he said that ASF has a wide genetic variability, which means its DNA changes a lot. “I do not know if we will be able to have a global vaccine that protects all animals in the short or medium term. It is unlikely for it to be universal, but it could be local (African, American, etc.). The good thing is that, considering current levels of mobility, it should be able to attack viruses circulating in various areas. But total vaccines, no,” he stated.

With regards to Covid-19, he encouraged the industry to keep preventing infections among workers, and to strengthen biosecurity on farms and the industry in general. “South American countries like Chile, which have maintained controls and barriers, have good chances. I encourage you to keep it up, to keep doubling down on efforts to implement all necessary measures,” he said.

After the Q&A round, the event finished with an invitation from Brett Stuart, co-founder of Global AgriTrends, and a leading international meat market analyst, to join the second webinar of the series on October 22nd. “The future of protein worldwide” will focus on the current situation of pork in Chile and the prospects for global meat sales amidst ASF and post Covid.