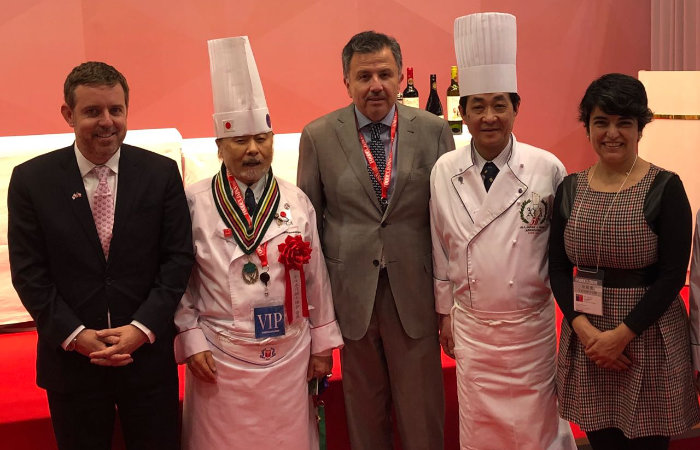 Japan was the venue for the 43rd International Foodex 2018, Asia’s biggest food and beverages trade fair. ExpoCarnes’ member and active participant of the ChilePork sector brand around the world, Coexca was there to showcase one of the most attractive products at the fair. This was Coexca’s Wine-Aged Pork, which, as its name suggests, is pork from pigs that have been fed a wine-based diet, and whose meat has undergone a special maturation process.

The event was attended by a number of senior officials, such as the Chilean ambassador to Japan, Gustavo Ayares, the CEO of Coexca, Guillermo García, along with Takahiro Ono and Yasuhiro Kubota, members of the Coexca Maxagro team in Japan.

The ceremony was opened by the Chilean ambassador, and he highlighted Chile’s virtues as a business partner due to its great stability. Afterwards, Chef Yoshiharu Furusho of the Association of Japanese Chefs surprised everyone with a cooking masterclass.

The launch of Coexca’s Wine-Aged Pork sparked interest among attendees at the event, and a number of key importers expressed their intention to form alliances in the short term with Coexca S.A.