Some of the main export destinations for Chilean food products are Eastern powers such as China, Japan, and South Korea. Given the current pandemic scenario, it is key for agencies that support exports to keep promoting the quality and attributes of each of these products in those distant countries. This is why the main export […] 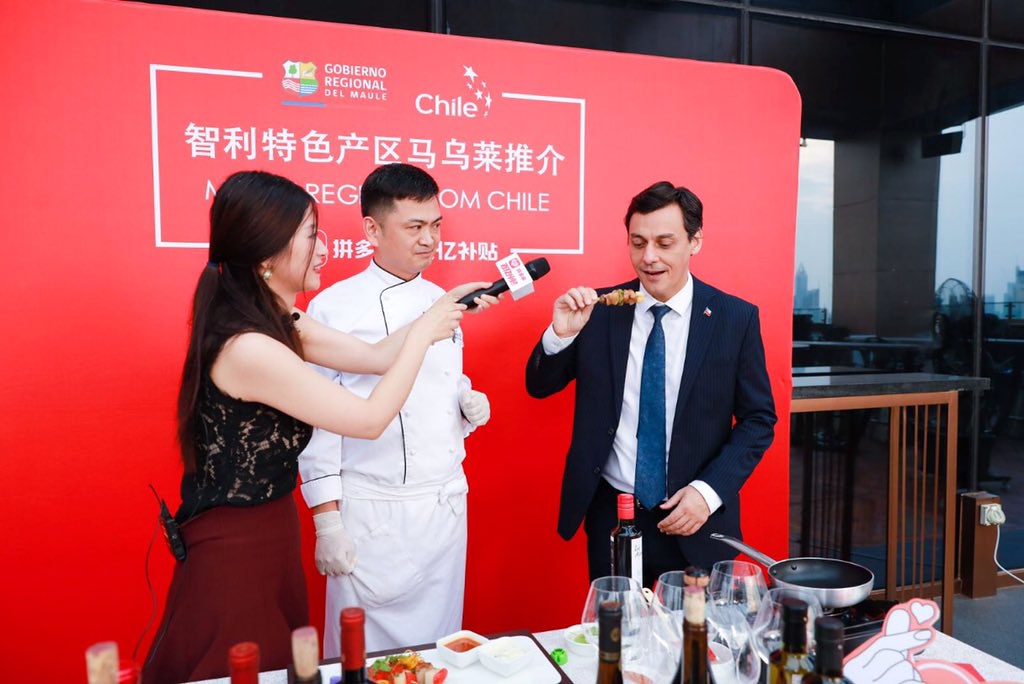 Some of the main export destinations for Chilean food products are Eastern powers such as China, Japan, and South Korea. Given the current pandemic scenario, it is key for agencies that support exports to keep promoting the quality and attributes of each of these products in those distant countries.

This is why the main export foods of the Maule Region were the stars of an advertising campaign in China, as part of an innovative digital marketing strategy developed by ProChile (the Chilean Exports Promotion Bureau), with the help of its commercial office in Shanghai, and the funding of the regional development fund (FNDR, in Spanish) of the Maule Regional Government, which invested USD 5,000.

The stars of the campaign were pork, wine, olive oil, and fresh fruit (juice concentrate and apple/cherry puree), alongside other popular products in China, focusing on that market and others such as the United States, Latin America, Mexico, and Europe, which are also relevant for the Chilean Region.

The campaign reached over 700,000 users of the e-commerce platform Pinduoduo. It included two cooking shows (at noon and in the afternoon), where a renowned Chinese chef prepared delicious recipes using Maule’s outstanding food products. Chinese influencers also showcased the Region’s wide range of top-quality products on their virtual platforms.

Luis Schmidt, Chilean Ambassador to China, and Juan José Vidal, Commercial Attaché in Shanghai, were part of the event, as well as Chinese importers and clients.

Vidal highlighted the large audience of the live broadcast. More than 700,000 people watched both commercial promotion activities, “which will allow many people to take an interest in buying Chilean products, particularly those from Maule, both in Chinese supermarkets and online.”

Guillermo García, General Manager of Coexca, celebrated the initiative to promote products from the Maule Region in China, a country where the company exports a wide range of products. It is one of its main destinations abroad, along with Japan and South Korea.

“Coexca is the only pork producer and exporter from Maule that took part in such an important promotion event in China, which shows the relevance of the development and internationalization of this industry for the Region’s economy. We are very pleased with the results and with the public-private partnership created to develop this innovative way of promoting Chilean products in China during the pandemic. It also attests to the efforts and the commitment of both the Maule Regional Government and ProChile to this task. We appreciate it because it shows that promoting the Maule Region as an agri-food power is not just a slogan, but a country goal we should not give up,” said Guillermo García.

Unlike Chile and the rest of Latin America, consumers in China buy almost everything online, including food, and even fruits and vegetables. “Pinduoduo in particular is one of the fastest growing e-commerce platforms in China, with annual sales of USD 165 billion (more than half of Chile’s GDP) by March 2020 and 620 million active users,” he added. Julieta Romero, ProChile’s Maule Regional Director, explained that the campaign is part of the agency’s new strategy, which was financed by the regional government in the context of the health crisis that has impacted global imports of white meat, although pork exports have increased during this period (15%). “Promoting products that are available in the markets is essential to keep supporting the economy,” Romero said in an interview with ChileCarne.

This new promotion tool seeks to boost China’s imports of Chilean meat products and to open new markets. The goal is to connect supply and demand to revitalize the Region’s foreign trade, replacing scheduled visits to fairs, invitations to potential buyers, trade missions, business roundtables, and other in-person activities.

“Both the Region and ProChile will continue to support exporters, looking for new markets and new products. We recently helped Coexca introduce new products into the Chinese market, such as liver and shredded skin. We are always searching for demand for the products exported from Maule,” said Julieta Romero.

The relevance of pork for the Maule Region

For many years, Coexca, a member of ChilePork, has organized the “Dead Pig Fair” (Fiesta del Chancho Muerto) in Talca, where Chilean and international chefs make various pork-based dishes. It is a popular fair, which brings together more than 100,000 people usually during the first weekend of August. Unfortunately, it will not take place this year because of the pandemic.

“This is the first action implemented by the Maule Region as part of the new digital promotion strategy. It will be accompanied by more activities for digital platforms in other target markets for the Region, highlighting sectors such as wine and agroindustry,” Romero explained. She added that “this effort is relevant for the recovery of local export companies, impacted by the drop in sales as a result of the global pandemic. We hope it will translate into the rehiring of workers and improvements in employment figures.”

Julieta Romero also mentioned that they are currently working in the Mexican market, where they intend to promote Maule’s food and wine. They are currently deciding whether to implement a similar action to the one carried out in China or follow the strategy that will be used in the United States with some variations. She also mentioned that they are expecting a proposal from a European country to replicate these initiatives. ProChile has a budget of around CLP 60 million to promote Maule products on e-commerce platforms with similar initiatives.

In addition, they plan to release two digital catalogs with the Region’s exportable offer. One would cover the entire wine offering, and the other will focus on fresh fruit and industry products. The catalogs are expected to be launched next September and October.