Both initiatives are part of a broader strategy to reinforce Chilean pork’s positive image and perception in the Japanese foodservice channel, among importers and potential customers, focusing on the features of the industry’s production process and the best recipes to make the most of this protein, which positions Chile as a high-quality producer. The activities […] 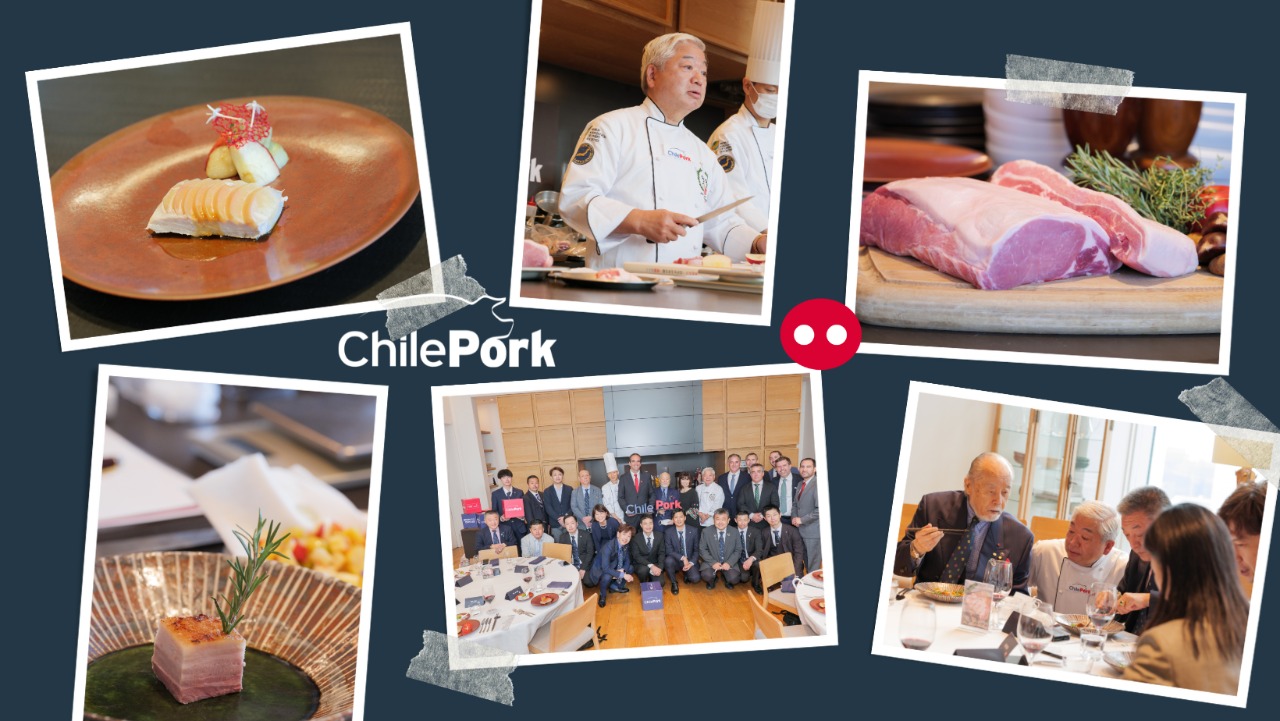 Both initiatives are part of a broader strategy to reinforce Chilean pork’s positive image and perception in the Japanese foodservice channel, among importers and potential customers, focusing on the features of the industry’s production process and the best recipes to make the most of this protein, which positions Chile as a high-quality producer.

The activities were organized by the Chilean pork exporting industry under their ChilePork brand -supported by ProChile (the Chilean Exports Promotion Bureau)- to mark 125 years of diplomatic relations between Japan and Chile. On October 13, there was an in-person cooking master class -the first since the start of the pandemic- that brought together 20 executive chefs from Tokyo’s most prestigious hotels and restaurants, as well as members of the Japan Chefs Association.

The master class was led by Masaru Osaka, French cuisine chef and former head chef at the prestigious Gakushi Kaikan restaurant, who now works as a consultant for various restaurants and companies in Tokyo. He was assisted by chef Tanaka, one of his apprentices, and together they made three dishes based on Chilean pork: pork loin with garlic-apple sauce, pork belly cubes with seasonal vegetables, and an entremet of Chilean pork belly.

“Of the frozen products that arrive to Japan, Chilean pork is very good. Wheat is widely grown in Chile and fed to the pigs. The resulting high content of linoleic acid reduces the melting point of pork fat,” explained chef Ozaka.

That same day, the ChilePork Seminar provided more detailed information about the industry to more than 80 people involved in pork imports in Japan. Vicente Pinto, Investment Commissioner for Asia from the Chilean Foreign Investment Promotion Agency; Juan Carlos Dominguez, Executive President of ChileCarne, the exporters association that manages ChilePork; and Brett Stuart, CEO of the Global AgriTrends consulting company talked about the global outlook of meat and what the Chilean pork industry is doing in food safety, biosecurity, and sustainability.

“In recent years, we have moved from positioning our product with importers and distributors to reaching out to chefs and strategic decision makers in the Asian market, particularly Japan, which is key for our medium and long-term business plans. After gaining the buyers’ trust, we position ourselves as leaders, thanks to our high quality standards,” says Juan Carlos Domínguez.

Every day around the world, 12 million people eat a serving of Chilean pork. Talking about its qualities, chef Ozaka highlighted: “Chilean pigs have a lower body temperature, which means a lower melting point that has a positive impact on the meat’s flavor, making it more tender and juicier. That is my impression of Chilean pork,” he added.

During the seminar, Domínguez invited all participants, “to learn more about and choose Chilean pork because our country offers unique high-quality products made under high standards of health, food safety, and biosecurity by an industry truly committed to sustainability.”